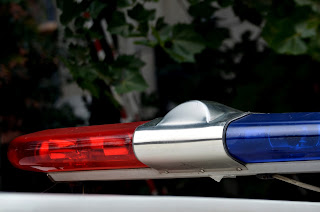 Years ago, I was pulled over by an officer while driving. It was after dark, and I was on a quiet street without other cars around. And something about the guy, though he was in a uniform, didn’t seem right.

My unease was apparent to him before too long, and he explained he was an airport police officer. Yes, my supposed turning infraction had been near the airport, but did he have jurisdiction outside airport property? I had no idea. I was scared.

After a verbal warning, he let me go—and though relieved to have come to no harm, I shook all the way home. Once there, I didn’t attempt to find out if this was a legitimate stop, to report this man in case others needed to be protected from him. I told myself he was a real cop, and maybe he was, though I still wonder if he had any right to stop me and have been unable to determine that on the internet in preparation for writing this post.

But after that scare, I promised myself that, if there was a next time, I would pull over only where there was more safety. I was never going to put myself in that position again. Soon, I forgot about it.

I have never been pulled over again. Maybe not only because I am a careful driver, but because I am a white woman. I don't know. And I don't know what it’s like to fear law enforcement because the color of my skin could make me more vulnerable to an officer prone to abusing or misusing his or her authority or, as a police officer, what it’s like to be vulnerable to criminal intent simply for doing my job.

That’s the problem. I don't know. But at least on some level, I should, or at least try. And I tell myself this every time tragic events like our country has experienced in the last week "pull" me over.

In my heart and mind, I know we are a diverse society whose people must take steps to listen, learn, and do what we can to address systemic problems, on all "sides," both as individuals and through trustworthy officials we elect. We have to dig into who and why and how, in any way available to us, and make sense of them so we can make a difference. Easier said than done, but mustn't it be done just the same? More than caring, more even than prayer?

But I also know that, pulled over once again by events that horrify and sadden, by tragedies that affect real people of all walks of life, by reactions from some that speak hate, we can't afford to simply shake as we retreat into the safety of our own lives, tell ourselves the problems will resolve on their own, and forget.

On Teachers, Editors, and Grammar

This piece was originally posted in January 2015,

Bertha was my English teacher in tenth grade, and, truly, she was not a nice woman. She embarrassed students and seemed to enjoy it. Not only were you in for it if you made a mistake, but once she even made fun of a student's name, in class, in front of all his peers.

This, to me, was the height of educational meanness. We called her by her first name behind her back, a sure sign of disrespect we thought she deserved.


And yet, her meanness is not all I remember about Bertha, whose last name I can no longer remember. I remember she drilled the basics of English grammar into me, effectively building on what all my other teachers had taught.

Fast forward to early in my career in publishing. One of the marketing guys was frustrated because his copy frequently came back to him from editors with changes of the it's and its variety. He finally asked one of the seasoned editors, who had been an English teacher, to explain what he had been doing wrong.

The time they spent together with some basic rules of the English language and grammar resulted in his copy improving almost immediately. Later she told me he said, "I'm a smart, educated guy. But no one ever taught me most of this stuff." What was obvious, of course, was that he had not had a Bertha in school, someone who ensured he at least had the opportunity to learn "this stuff."

I was and still am grateful to my high school English teacher for what she taught me. I'd like to think I would remember Bertha for that gift even if she had been demanding and strict yet kind to her students.

We're told by colleges and universities that many students arrive these days without having learned grammar, without knowing how to write well in the most basic of ways. I am not a professional educator, so I cannot say. But . . .

Here's to all the elementary through high school teachers—including homeschooling parents—who teach English . . . "this stuff" . . . and more to their students! And in cases where students have not been prepared, here's to all the university profs who encourage struggling freshmen to take advantage of campus writing labs.

Last, here's to all the authors who allow us editors to (nicely) help them keep the English language looking good on the printed and digital page. Whether or not writers had a Bertha, it's easy for them (and all of us) to make mistakes in the throes of storytelling and message making.