There it was, on one of those decorative signs you see in so many gift shops: Act Old Later. No photo, no graphics, just those words.


I had to think about that one.

Most of us do slow down as we get older. Very few bodies escape all the effects of each passing decade. Acting old, however, can also apply to being set in our ways with very little interest in exploring, trying, testing, experiencing . . . whatever we have determined is outside our druthers and comfort zones. It's giving in to barriers that too easily halt us. And that mentality can strike at any age.

Now, as a chronologically old-ish person (which is all I am willing to admit to), I certainly have perfected most of my ways and my druthers and my comfort zones, and I am married to someone who has too. And those ways and druthers and zones spill onto each other as well. Together, we sometimes act old when we don't need to, more than simply shedding some "shoulds" that are thankfully ejected as life goes on.

But I am not exactly sure what to do about it. I only know that, after seeing those big, bold words, I would like to spend some time telling myself to “act old later” and see what happens.

(At the same time, the world at large does not always help. Consider how encouraging it would be for the old-ish to act old later if the more young-ish didn't start conversations with “At your age . . .,” see old-ish as belonging only in old-ish groups, and so on. The point is, acting old later might be easier without assumptions that chronological age and an aging body are the most defining aspects of an old-ish person's life. A lot of "at your age" rocking chairs are sitting empty.) 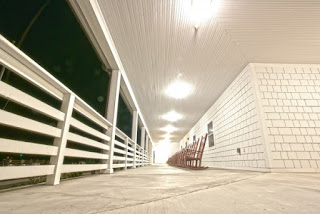 Being an older-ish and set-in-her-ways and easily halted person, I do need to think about this. Even those who are young-ish, but who are set in their old-acting ways, however, might have some thinking to do about this concept of acting old later.

How do you "act old later"?