The Secret to Spin and Juggle


For one reason or another, several projects I wanted to do in my freelance editorial business are overlapping. I knew that would happen when I accepted them all. And I know it will be okay. But here I am, on the edge of spinning and juggling too much.

Oh, I know how to spin and juggle. I learned it in college, in my career life, and as a mom. You know, spinning plates in the air, juggling balls, trying to keep life going in the direction I want or need. But just because I can do it does not mean I should do it anymore than I have to. Yet I confess it is still hard for me to stop myself from getting in there to spin and juggle with the best of them. I used to practically make S&J a career itself.

Sometimes, no matter what we do, spin and juggle we must. Really, ask anyone. Especially a parent. (I don’t think there is a mom in the world who hasn’t felt like the juggler in this fun video, and I hope they all give it some of the same little bit of sass and pride she does!)

When we do find ourselves in the spin and juggle cycle, triage is important. Deciding hour by hour, sometimes minute by minute, what we can

The big problem is when we are unwilling to let anything go. Instead we spin and juggle more and more, faster and faster. Some people practically sprout a third arm to take on even more, perhaps in the form of forgoing sleep.

Maybe you thought you were going to get some fantastically wise, secret advice here about how to deal with too much spinning and juggling. A magic formula? How to afford a maid? No, I just want to tell you I have been there and it is not worth it. It’s great when we can prioritize, simplify, and plan to avoid too much spinning and juggling. But sometimes—and this is easier if you do the triage thing—you just have to let something crash. You can superglue the pieces back together later, or you can sweep them up, throw them away, maybe wondering why you were spinning and juggling that thing in the first place.

Best of all, you can sigh about the mess, but not cry or scream or shut down. And that is my advice, the only secret I know: keep the cry-and-scream-and-keep-going-worthy spinning and juggling, but let the sigh-worthy drop. I think you'll be glad you did.

The Choice to Be Kind on Someone's Really Bad Day


He came home from fishing in the late afternoon and suggested we eat out. I am no fool; we spruced ourselves, and off we went at almost 7:00 p.m. (This kind of weekday evening expedition is unusual for us!)

Right off the bat, our server told us this was only his fourth day on the job. He also mentioned he was used to making more money. Maybe that was an early bid for a great tip, or maybe he was embarrassed about taking a job he thought was somehow beneath him. Either way, he was pleasant and personable, especially as he returned one minute later to refill our water glasses.

It’s just that we didn’t hear from him again.

We waited and waited. Maybe they were short staffed in the kitchen? Then almost thirty minutes in, I saw a couple I had noticed ordering after us being served their food, by the same guy, who never looked our way. Not once.

This was not good.

My husband managed to get the eye of the manager, and when he asked as kindly as he could if she could check on our order, she promptly left to do so. Her face looked a little drained.

In only a few minutes, she was back. “Is it okay if I sit down with you?”

Wanting her to know we weren’t angry, I smiled when I said, “Sure. Do you have a story?” and my husband joked that she better not be after him as she sat beside him. She looked kind of relieved, but confident. Maybe she had braced herself. Maybe we had looked mean. Maybe lots of people had been mean in her food service career.

The guy had been doing a good job, she said, but earlier that evening she let another person go and had to ask him to serve in our section of the restaurant as well as his. And, well, he forgot us, not even getting our order in. (Yes, I am still wondering how you can miss an order right there on your order pad, but that is beside the point and I only ever worked in a doughnut shop back in the day.)

She offered to make our dinner herself, in ten minutes flat. And she really did it. As my husband paid her for the meal (at a nice percentage off for our trouble, thank you), the server came out to explain and say he was sorry, which was another opportunity to say, “That’s okay. Things happen.”

Yes, we were tired and hungry and out later than we had hoped to be, but so what? We had no pressing business or cranky kids with us, but so what if we had? We had an opportunity here, and though we are generally nice people, we still had a choice to make: stoically accept our fate with no sign of understanding or do what we could to be intentionally kind.

Are we always nice when something goes wrong, never annoyed, with each other? No way. (Yes, I am the worst.) Have we ever lost it a little with someone who did not treat us like we thought a customer should be treated? Yep. We make mistakes, react badly, and have “faces.” You know, faces that say, “I disapprove,” or “I can’t believe you did that,” or “You just made my life harder, thank you every much.”

I am only telling this story to remind us all, me included, that kindness goes a long way, especially on someone's really bad day. 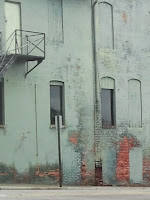 We live off a main street in our smallish town, nearly on the edge of the city, a stone’s throw away from cornfields. When we drive home from downtown, we go past businesses large and small, including our favorite diner. The beautiful little train station where trains no longer stop, much to my despair. One of the town’s two hospitals, the one with the crosses standing tall against the sky. It has changed its name since my first two children were born there.

We travel through neighborhoods that sprang up in another era, with both homes well kept and that have seen better days. Past churches, one of them with a "For Sale" sign in front, its congregation moved on. By a long-time ice cream stand, a community landmark if there ever was one. It proudly holds its place in winter, waiting for spring to come.

We also pass two buildings, scraped and crumbling, broken and boarded, a green over red brick that somehow calls to me. They are seemingly without purpose, though one has a light on inside, doesn't it? Perhaps there is hope there.

Some days, for whatever reason, I feel as though I am like those buildings—a little scraped, a little crumbled, a little broken, some parts boarded up. Not quite what I was, somehow. Not quite up to my potential. Not quite sure how I got here.

I'm not the only one, right? 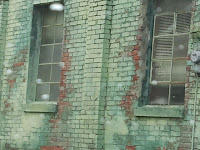 But unlike those buildings, we are living, breathing, God-made beings. Though scraped, we are beautiful shades upon original brick. Crumbled or broken, we have purpose still. Whatever is boarded up can be uncovered and revived. A light is always on.

When Writing Is One of the Keys to, Well, Writing


Though writing a book is not in the cards for me yet, and most of my writing is for clients, I still like to write for me. I write for this blog and I am getting into contributing to a couple of other blogs too. Still, I can get busy freelancing or be otherwise distracted and go too long without writing for me, and then writing for me seems, well, harder than I expected it to be.

I am sure there is a heap of psychology to cover this issue. But I don’t have time for that. I only know that when I work through the work of writing to get to the love of writing, I find . . .

Is this concept, writing as a key to writing, profound? Not so much. Or maybe. And you can find versions of this advice all over the World Wide Web, or maybe in Psychology 101 textbooks.

I’m just sharing that this week I did some writing. It not only felt good but it made me want to write more. Writing = writing = light bulb going off in head about writing. Huh!