The Santa dish came to me before she died.

My mother's world was becoming smaller and smaller as she and Dad moved from a house to an apartment, then from an apartment to assisted living. Her physical, emotional, and mental capacities lessened as well, as the illness that eventually took her life exacted its toll. And as all this happened, most of the Christmas decorations she had collected over the years had less meaning for her. Most were given away.

But the Santa dish was not given to me; it was entrusted to me. 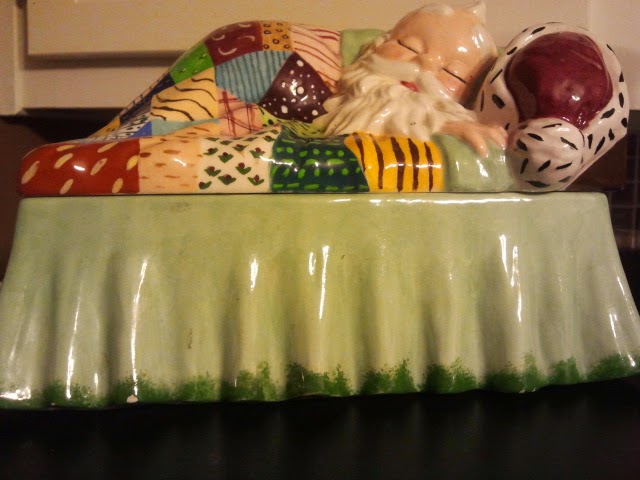 When my brother and I were kids, we lived next door to a woman who had hand-painted murals on her walls and hand-painted ceramics all over her house. She also had pet birds in cages (and some not in cages). I don't remember if she made her living as an artist or what her name was or why she loved birds so much, but occasionally she cared for my brother and me if Mom had to be somewhere else when we walked home from school for lunch. (Do kids still do that?) It was an interesting place for a kid to be, and she knew we liked Campbell's soup—chicken and noodle or tomato!

My mother cherished the hand-painted ceramic Santa dish this neighbor made just for her. The bottom is Santa's bed, and when you put on the lid, you can see him peacefully sleeping under a patchwork quilt with his cap on the bedpost. I have never decided if he is tired after his big night circling the globe or is resting up in preparation. (Mrs. Santa must know, but she seems to be elsewhere.) Mom usually put peanuts or cashews in that dish. Or sometimes mint pastel nonpareils. I can still picture their creamy pink, green, and yellow goodness—with white dots on top. I can still smell the sweetness.

We couldn't fix that. No one could. But I could keep the cherished dish safe.

And I have. In a box up and down the attic stairs—down in December, up in January. Right now it sits on top of our refrigerator, a safe place away from little hands, with only a chip or two to show for its travels. But it sits empty. I never think about filling it up. I never think about creating new memories with it.

Instead I let the sleeping Santa lie, where he's always been, keeping a Christmas memory from years past safe.

I hope no one minds.


Portions of this post first appeared in a former blog.