Moonlighting, Pink Couches, What You Wrote, and Is It Same Old, Same Old?


At my house we have been dipping into some old TV series on DVDs from the library. One is Moonlighting, starring Cybill Shepherd as Maddie Hayes, Bruce Willis as David Addison, and my favorite, Allyce Beasley as their rhyming receptionist, Agnes DiPesto. Click here for the now-iconic opening sequence with its memorable theme song. 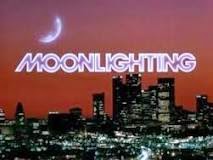 The snappy dialogue the series is known for is still enjoyable, though the simplistic plots serve mostly as a vehicle for Maddie and David’s chaotic relationship. And the 1980s pastel décor and fashion don’t bother me—but, please, let's not ever go back there.

What did bother me (other than how hard their detective work was without cell phones) was that in one episode I knew early on what had “really happened.” Not because I remembered the episode or because it was badly written, but because I have seen the same twist in film, TV, and books so many times. Maybe—maybe—if you ignore the complete body of work from Agatha Christie, the twist was somewhat more original thirty years ago. But today? Not so much.

Other than when enjoying classics and personal favorites that capture their hearts and imaginations over and over, film and reading enthusiasts usually appreciate something new that can catch them by surprise. How many times have you heard, "It's the same basic plot as [fill in the blank]" or "His views are like those of [fill in the blank]"? New twists (or twists on old twists), illustrations and quotes not often used, characters drawn with a unique combination of emotional layers, and dialogue that is real but fresh are appealing.

Sure, an author can successfully use the same technique, illustration, basic plot, or adjectives other writers use without being considered lazy or a copycat. As long as no copyright infringement is involved, whatever is right for a book is right for a book, and one voice can differ enough from others to stand out and make familiar, fresh. Readers can also know what's coming, especially in fiction, and still enjoy what they're reading. If that weren't true, no one would ever read favorite novels multiple times.

Sameness is still a good thing to watch out for when writing, don't you think? Because I have to confess, sameness sometimes causes me to skip ahead or, worse, just close a book and walk away, which was not what the author intended. Been there, done that is what I am thinking (which apparently people started saying a lot in the 1980s, most likely while sitting on a pink couch).

For readers, have you ever left a book unfinished because something about it was so . . . same old, same old? Like what?

For writers, do you think about whether or not you have some "same old, same old” in your work?